The Summoning Staff is a Magic item added by Lycanites Mobs that can be used to summon various mobs as temporary minions. It requires a Magic Skill of 8.

The Summoning Staff can be crafted with an Ender Pearl, a Bone, and a Gold Ingot. 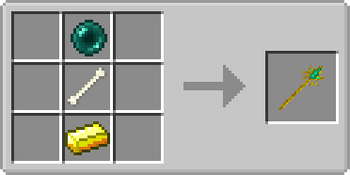 ​​​The Summoning Staff can also be repaired with gold ingots on an anvil.

The Summoning Staff can summon temporary minions by holding right click. These minions are temporary, and their type and behavior can be set in the Beastiary under the Summoning tab. The minions are identical to their mob equivalent in the wild, with the exception of being tamed under your command.

Summoning Focus is your limiting factor as to the number and strength of the minions you can summon. While holding the staff, a bar will appear above your Hunger Bar that will display how much Focus you have. Each minion has a set Focus cost, and summoning minions will use your Focus equivalent to that cost. Holding down right click longer will allow you to summon more minions, at the cost of more focus.

The Summoning Staff allows you to summon some of the mobs you discover in the world; this includes most elementals from the mod and some other minions. To gain access to a minion, you must have a Knowledge Rank of it; these can be gained by being near the creature, killing multiple of the same creature type, or right clicking it with a Soulgazer. Once your Knowledge Rank of a creature is at least 2, you can summon Subspecies. These are stronger versions of the original mob. The following is a full list of minions that can be summoned via a Summoning Staff, as well as their Focus Costs:

Certain elemental Minions can be summoned together to create a more powerful Minion. To do this, simply summon the first Minion, then summon the second on top of the first, and watch as your Minions combine. All Minions summoned this way will be a higher level than normal. In addition, if the original Minions have a Subspecies, the resulting minion will also be a Subspecies. The following is a full list of summons that can be fused into another mob: